Wondering what the above symptoms could indicate?

… that you may be suffering from periodontal disease, also known as gum disease.

Contrary to what the name suggests, it is not limited to your gums. It may also affect the supporting bone surrounding each tooth, depending on the severity of the disease.

The symptoms you will experience will vary depending on the stage of your “gum disease”. The early stages of the disease may have no or very few symptoms and could remain undetected if you don’t see a dentist regularly. 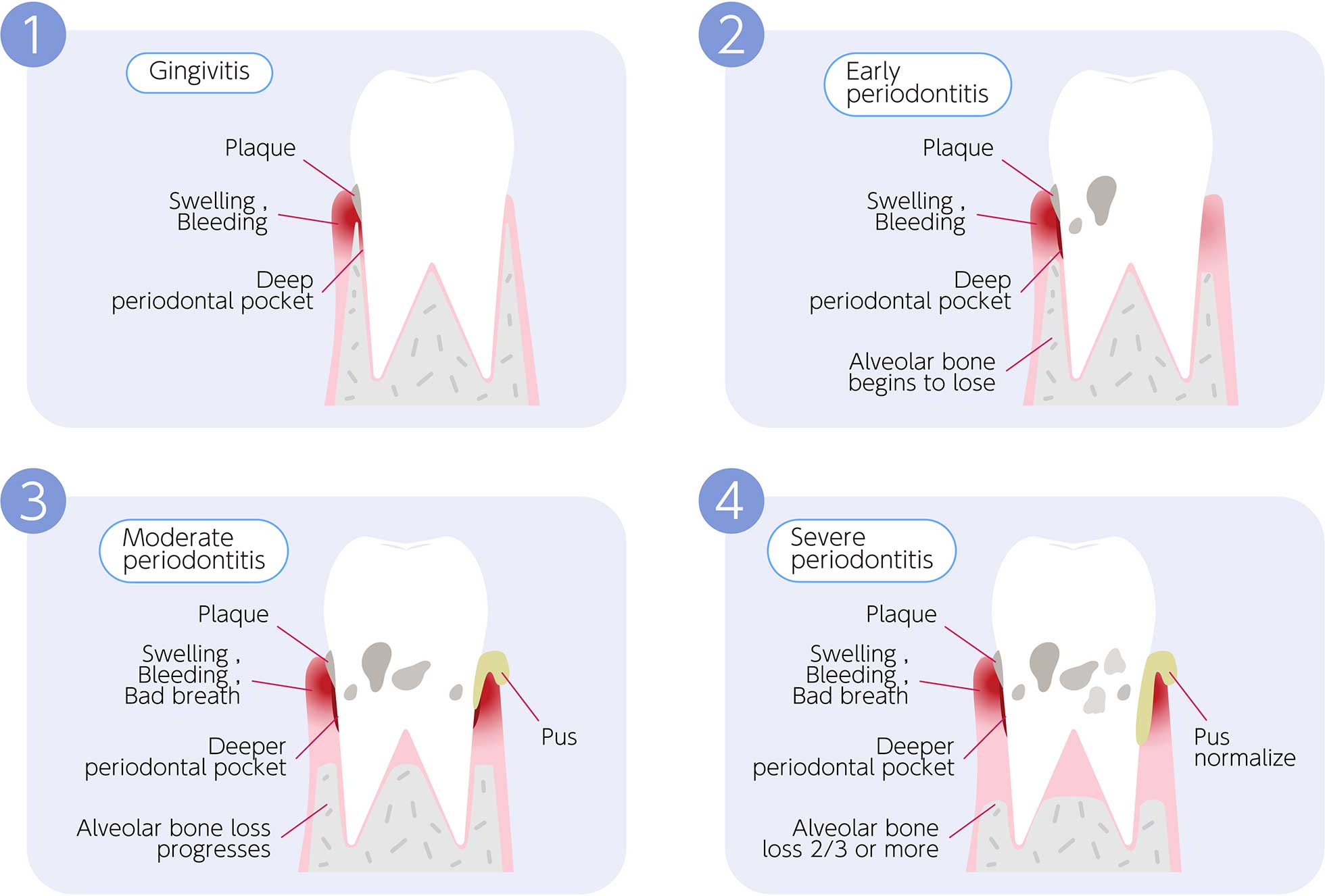 As the disease progresses, you may experience some or several of the following symptoms:

Let’s take a closer look at the two most important stages of gum disease.

Many levels are determining the severity of gum disease. This notwithstanding, gingivitis
and periodontitis are some of the most common ones.

Gingivitis causes swelling, tenderness, and bleeding of the gums. It is the first stage.

It does not cause a loss of tissue or bone, and you can fix it with improved oral hygiene.
Periodontitis, however, is an advanced stage of gum disease that affects all the tissues that hold the teeth in place:

Due to inflammation, periodontitis causes the deterioration of both the gum and bone.

You will have receding gums that will increase spaces between your gums and supporting bones. In healthy gums, you typically observe a distance of 1-3 mm between the point of your gums’ attachment to your bone and your gums’ tip. That increases to 5-7 mm during the process of “pocket formation” typical of periodontal disease. At this stage, the bone has deteriorated and lost, weakening the support system of your teeth.

Pockets become infected and threaten the stability of your teeth. As the condition advances, it can cause root caries, major bone loss around your teeth, causing your teeth to become loose, leading to their loss.

Let’s now look at how you develop periodontal disease, a living and breathing infection in your mouth.

The causes of gums’ swelling, bleeding, and receding gums.

Your mouth, just like any human mouth, is full of bacteria that create plaque on your teeth. You can remove them with regular brushing and flossing. However, it may be impossible to remove the plaque situated along your gum line.

And we would be remiss not to talk about tartar. It is even more difficult to remove than plaque, and it is typically found along the gum line and between teeth.

So, what exactly is tartar?

It is a hardened form of plaque, a combination of food debris and bacteria. It further irritates the gums since the bacteria it contains can cause inflammation of your gum tissue. They do this through the chemicals they produce.

This process will open the door for the following to happen:

Hence, during the more advanced stages of gum disease, your bacteria will reach your tooth’s root, loosening it, and leading to tooth loss.

Before we talk about periodontal disease treatments, let’s quickly discuss how we can prevent it.

How can you prevent periodontal disease, hence gum swelling, bleeding, …?

To combat the swelling, bleeding, and tenderness of your gums, you need to maintain a good and regular oral hygiene regimen:

It is also important to reduce or avoid sugary and starchy foods, which these bacteria thrive on.

Though, to ensure you nip any issues in the bud, the best course of action is regular checkups and cleanings every six months.

Tartar removal requires professional dental cleaning since it is very hard and firmly attached to your teeth and roots. Hence it is challenging to reach it (at the gum line and in between teeth).

This cautious approach will avoid more complex and costly procedures, such as: